In the beginning of July, 2004 we went to O'ahu for our summer vacation 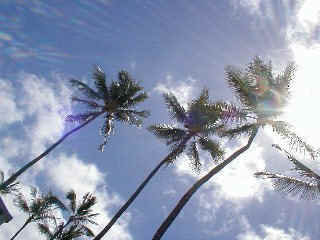 We stayed in a hotel on Waikiki, a section of Honolulu.  Waikiki is very crowded with hotels, people, and the associated traffic, but the beach is still absolutely beautiful.  The water is clear blue and warm enough to swim comfortably in.  The beach, itself, is clean and well kept.   Interestingly, a hundred years ago, Waikiki was a wetland.  The sand was all imported from Molokai, the next island to the southeast

Being summer time, it got quite hot at mid-day, so we avoided the beach at that time.   We got into the habit of going to the beach from about 9-10:30 am and again from 6-7pm.  At these times the beach was not at all crowded.

Here's Natasha and me on a "water bike", which was a fun way to paddle around the shallow water near shore.

Tourism is the biggest industry in Hawai'i, and there are a lot of things to see.   Of course, many aren't worth the price of admission.  The Dole Plantation, for instance, wasn't all that interesting, but the bus ride around the island was. (Not all family members agree with me on that one.)

I had high hopes for the Polynesian Cultural Center, but it turned out to be more of a theme park than an anthropological museum.  It's also expensive and a long, long way from Waikiki by bus.  If I had it to do over again I would go to one of the other Hawai'ian Luaus closer to Waikiki.  The best part about the PCC was the show in the evening.

Here's some picture's of my daughter that I took at the luau at the PCC:

And a picture of my lovely wife and me (I'm the one on the left):

One of the popular tourist destinations is the USS Arizona Memorial at Pearl Harbor.   The memorial, itself, is a simple white building built on the hulk of the Arizona where it sank on the morning of Dec 7, 1941.  Inside the memorial is a list of the young men who died that day aboard that ship.

Off to the one side of this list was a smaller list of men who survived the attack and the war.  These men chose to be interred with their shipmates on the Arizona when they died.  Some were interred as recently as 2003.  The events of that day influenced them so deeply that after 62 years these men chose that as their final resting place.

The Arizona Memorial is free to the public, so it is quite crowded.  While we waited for our turn to go to the memorial we looked through the accompanying museum.   The museum did a very good job of explaining the political background behind the decision of the Japanese government to attack the U.S.  and Britian on mutiple fronts in late 1941.   The exhibits made clear that the attack coming before a formal declaration of war was a violation of accepted procedure among the nations of the world, but they did not resort to jingoism or racism in condemning these actions.

One of the best memories I have of this vacation is Parasailing.  Natasha talked me into doing this with her, and we talked Ira into doing it, too.

It was a lot more gentle than I thought it would be.  You put on a parachute harness and a flotation vest.  The deckhand hooks you to the parachute.  You crouch on a platform at the rear of the boat waiting to go.  A few moments later the captain guns the engine and pulls away, but you don't move.  In seconds the boat is 50 feet ahead of you and 50 feet below, but you don't have any sense of motion at all!    As the boat moves, you go higher up.  We got up to about 700 feet.   The view of Honolulu, Diamond Head, and the Wo'olau Mountains is astounding.   When the boat stops,  you slowly drift down.  The captain watches and as soon as your legs touch the water he starts going again, pulling you up.   When the ride is over, they slowly winch you back in to the boat and you lightly step back onto the platform.  An excellent experience.

The other high point of the trip was snorkeling at Hanauma Bay.

It really is this beautiful!

At the park gift shop, I bought an underwater camera for $16.  It came with a 27 exposure roll of film (silver-halide!) and the instructions say that it can be refilled.

This was the best picture I got from that camera.  The fish was only a few feet under the surface so there was still plenty of light.  I took several pictures of fish that were a few feet deeper and the picture quality was much worse.

Even with all the development and all the tourists Hawai'i is a wonderful place.   I can't wait to go back.

The beach at Waikiki at sunset on our last evening in the islands: